A group of seasoned imaging informatics veterans, fed up with years of relatively fruitless toil to achieve interinstitutional image exchange, called on health care providers to use their market power and contract only with image exchange vendors who commit to begin vendor-to-vendor image exchange by no later than 2024.

“Despite the widespread availability of technology to transfer electronic health information, medical imaging data is still predominately exchanged between institutions via physical media (eg, CD, DVD, or flash drive),” despair Larson et al in the March issue of the Journal of the American College of Radiology. Calling this manual process unreliable, burdensome, inconvenient, and an unacceptable and frequent cause of delays in patient care, the authors assess options and provide evidence that the failure to achieve more patient-friendly image exchange was not for the want of effort on the part of many radiologists, physicists, and organized radiology.

At the outset, Larson et al make the point that solutions attempted during the past 10 years have focused on the technical problems associated with interinstitutional image exchange, but bigger problems could be related to market dynamics, misaligned incentives, and other coordination problems. The ensuing summary of their article highlights the individual efforts— from DICOM document exchange protocol to the ACR’s #ditchthedisk campaign— and describes the image-exchange models discussed.

The authors frame the problem as a network problem, recognizing that autonomous nodes (in this case health care institutions) connected by links comprise the “exchange.” In some cases, the nodes are linked via a hub, an intermediary technology and the managing organization.

(1) individual carrier, in which the patient pr surrogate delivers the image to the receiving institution, not technically a network because it is not based on pre-existing relationships but included because it is the predominant model. It requires extra personnel time and occasionally fails due to incompatibility because it does not rely on predetermined technical standards. Up-front investment is limited to personnel, space, software and hardware o upload the image.

(2) peer-to-peer network, in which images are transferred directly from the sending institution to the receiving institution via secure electronic transfer over a computer network, employing “a many-to-many relationship, with each institution linked (or potentially linked) to each other institution.” This network adheres to specified communication standards, including technical standards, protocols, and administration processes. They require a significant amount of work in developing technical and legal relationships. The authors note that it is unlikely to provide a single solution for image exchange because “it would require either the resources to manage the innumerable one-to-one institutional relationships or a strong central authority to establish and enforce common standards.”

(3) single central hub, to and from which all images are transmitted, and to which all participants are connected, and employing what the authors call a “one to many” relationship. It represents as central authority that can develop and enforce standards, but does not allow for preexisting smaller networks. Problems derive from a power asymmetry and could include sluggish innovation and limited resources for ongoing development.

The hybrid models that incorporate elements of the basic models , wehand are labeled

(4) linked multihub, which consists of linked hubs, each of which is capable of exchanging images (for instance, a hub-and-spokes airline model), a model that mitigate the disadvantages of the hub model, and discourages monopoly effects.

(6) hub-in-hub, wherein a cluster of hubs are linked to each other via a central hub that enables bidirectional image exchange, allowing advantages of the linked hub model with a central entity with the power to enforce standards.

(7) hybrid of all models, this encompasses all models and incorporates a central authority through which individual institutions and hubs may exchange images in addition to supporting direct and indirect links between institutions and image exchange entities, with the advantage of allowing effective solutions to arise organically.

The authors frame the problem of achieving national interinstitutional image exchange as a large multiplayer game, applying game theory with several potential Nash equilibria: “A Nash equilibrium is reached in a cooperative game when no player has anything to gain by unilaterally changing their strategy. Such equilibria imply stability over time.”

The individual carrier model provides the most straightforward example of a Nash equilibrium in that it persists—has stabilized and endured over time—despite its inconvenience to patients. The other contenders to achieve a Nash equilibrium, the authors believe, are the peer-to-peer model (although it would be challenged to keep standards updated) and the linked multihub model, which in game theory terms include two multiplayer games: hubs need to cooperate and each institution needs to connect to at least one hub.

“Once in place, the linked multihub model likely would be stable, as long as attempts either to act noncooperatively or to merge into a monopolistic single hub were recognized and disincentivized, either through market forces or regulation,” the authors recognized.

A number of limiting factors have prevented the transition from a carrier model to a global network model. The authors point to local purchase decisions made at individual institiutions, by hospital executives and IT staff who may not understand the need or be willing to prioritize interinstitutional image exchange as an investment. They also identify technical hurdles of communication between disparate PACS and electronic medical records.

The imaging and medical informatics communities have made some notable effort to facilitate electronic image exchange among disparate institutions, most notably the Integrating the Healthcare Enterprise effort, founded in 1998 to develop health care informatics standards, including interinstitutional image exchange, such as the Cross-enterprise Document Sharing standard. “Despite the efforts, the IHE initiative was not widely embraced by PACS or image exchange vendors or local institutions, who have had little incentive to adopt the standards,” they wrote.

In 2013, RSNA received an NIH grant to build a patient image exchange solution based on IHE standards. Several pilot projects in 2014 validated the concept and resulted in the definition of a standard for image exchange, but it also demonstrated that patients preferred that providers exchange the images for them, according to the authors.

ACR also contributed to the initiative. Its Data Science Institute and Informatics Commission partnered with 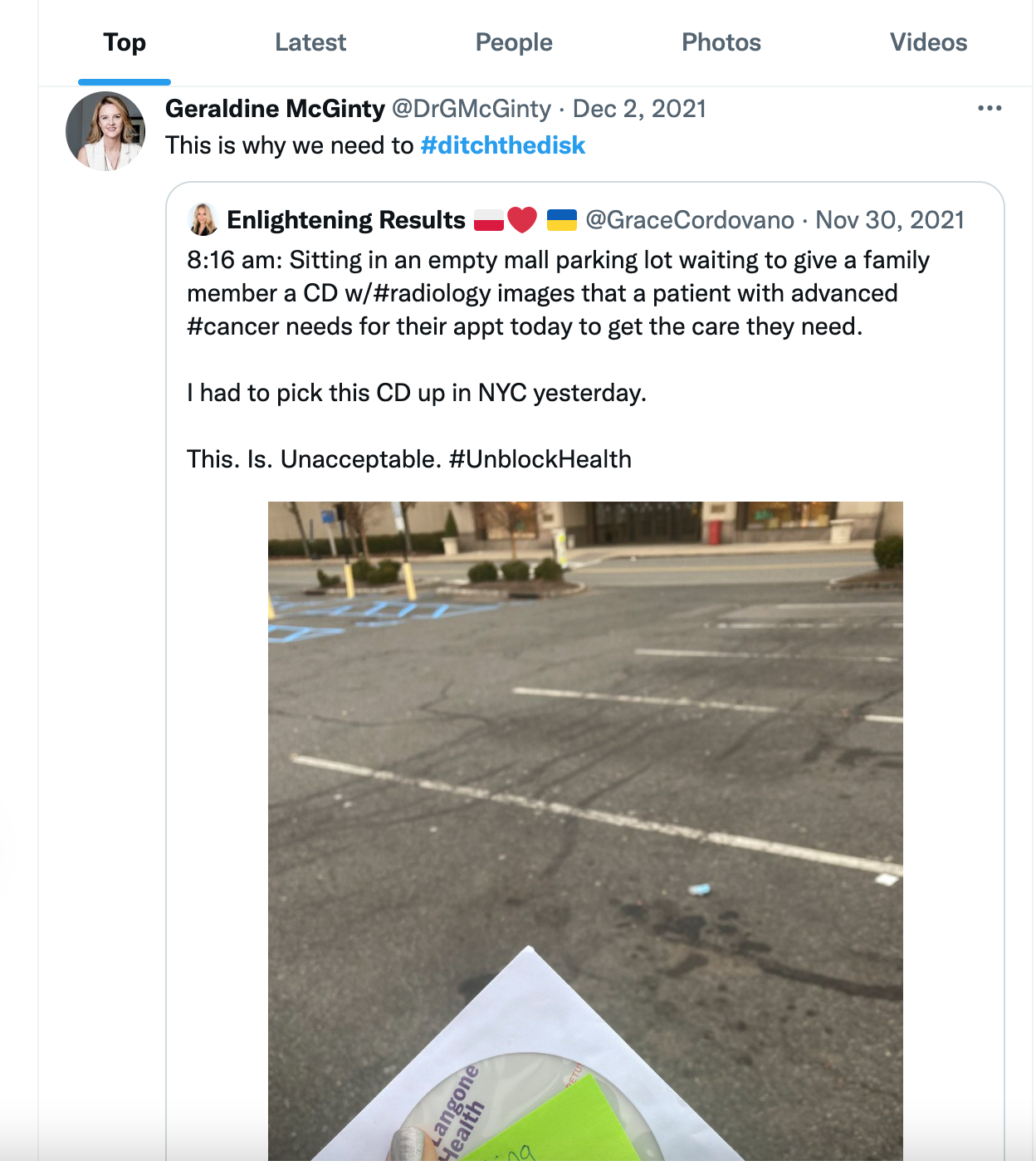 RSNA on a public-facing campaign, #DitchtheDisk, to raise public awareness around the problem. The last time this hashtag was used on Twitter was by former ACR chair of the Board of Chancellors Geraldine McGinty, MD, who retweeted a post on Nov. 30, 2021 made by a family member of a patient with advanced cancer. She was waiting in an empty NYC parking lot to pass off the disk in advance of an appointment that would enable the patient to get needed care.

Still, all these efforts have met with limited success.  The authors suggest that the model most likely to succeed is a linked multihub model, either directly or via a hub-in-hub model, and that the critical vendor behavior required to enable such a network is for them to agree to “complete the circuit” between disparate providers by directly exchanging images with other vendors. These are their recommendations:

The authors note that no one individual, institution, or vendor can unilaterally move the market to a more patient-friendly configuration. “Perhaps the most important behavior each entity can adopt is to genuinely commit to doing its part to bringing about a linked multihub model and to hold others accountable for doing their part,” they conclude.