This is a huge, huge big deal. You're no longer controlling your assets....The second you sign that contract you are a minority shareholder in a private equity company. That renders you almost no rights.

If you are looking for evidence that the private practice model of radiology is sustainable long-term, look no further: five private practice radiologists made an open-and-shut case for practice ownership as they responded to questions submitted by early-career radiologists at Strategic Radiology's recent Virtual Happy Hour—Independence and the Radiologist: Why Own Your Practice. 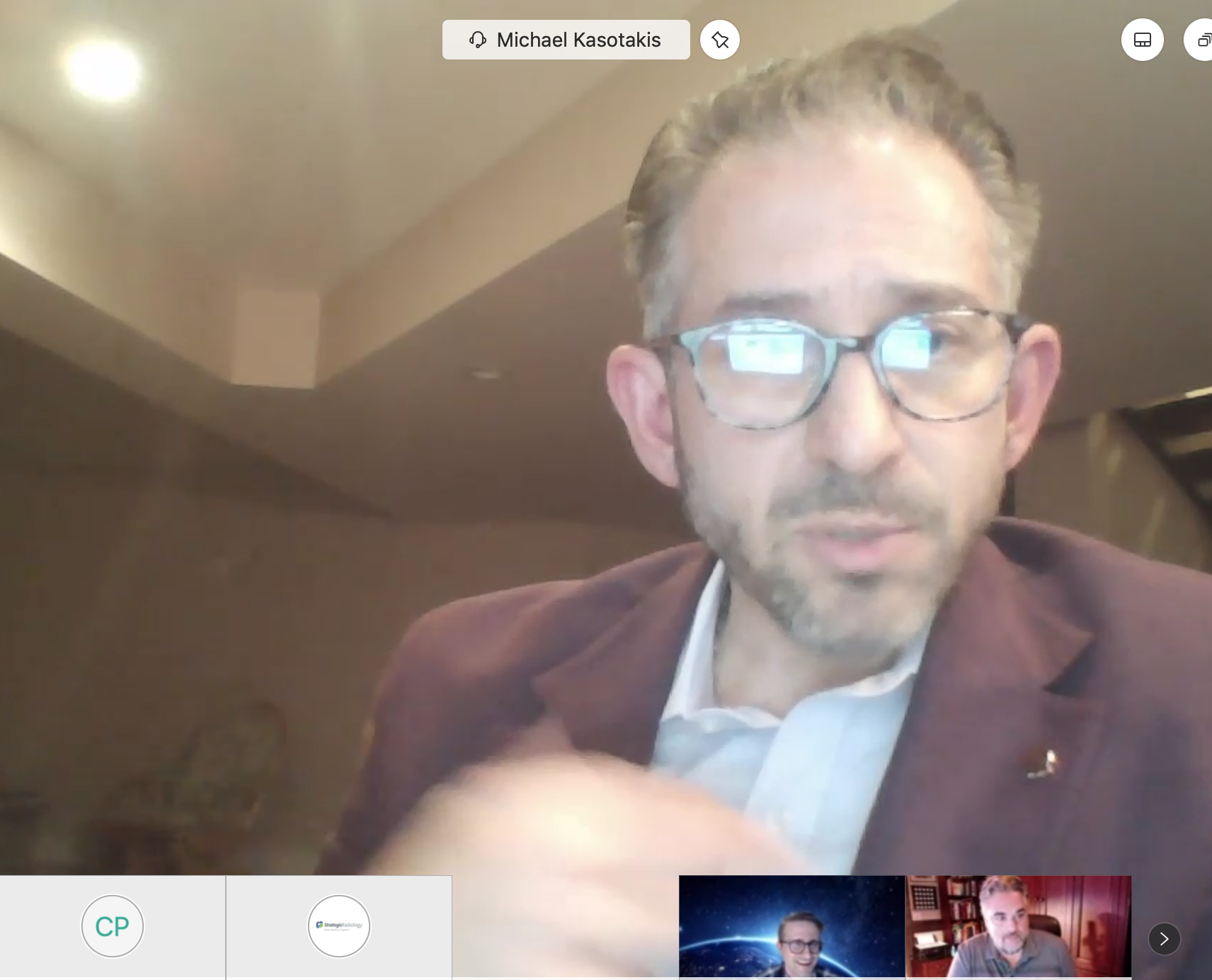 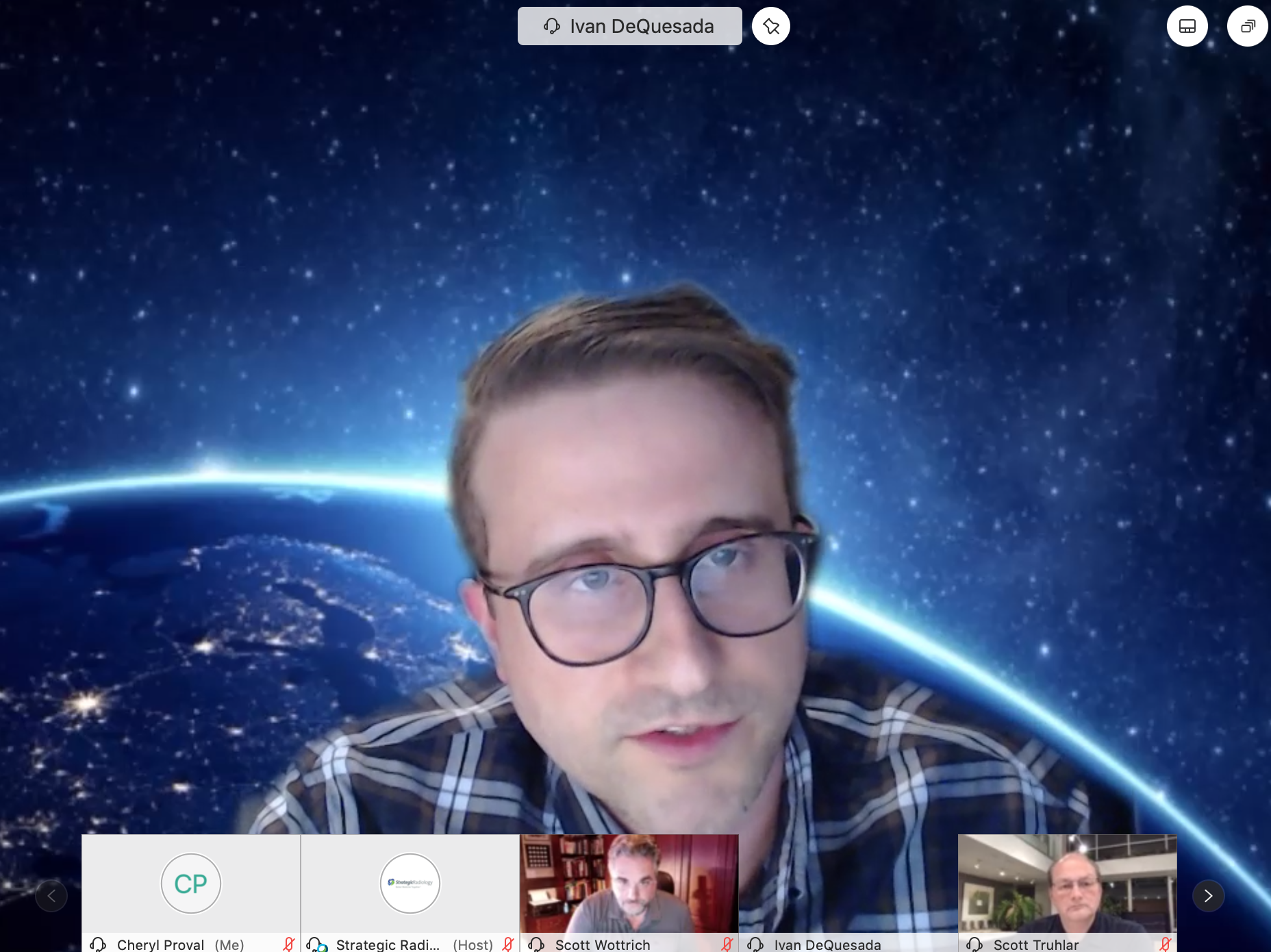 opportunities in radiology. Dr Kasotakis was introduced into the Michigan Radiological Society by a mentor and subsequently became the chapter’s youngest president in 2016. Dr. DeQuesada was recruited to his practice by his mentor, ACR RUC advisor Kurt Schoppe, MD. Dr. Truhlar initiated an annual private practice day for radiology residents at the University of Iowa, in which representatives from private practice educate residents about the practice model. All five radiologists agreed that it is never too early to reach out to the practice you want to join as soon as you know where you want to be: in fact, Dr. Kasotakis recently recruited a radiology resident who first reached out when he was in high school.

Rather than being a nuisance, a proactive resident or fellow is showing one of the desired

characteristics sought by private practice. “You're showing what we need in independent practice: You’re assertive, you've identified your goal and what you want, and then you're acting on it,” notes Dr. Truhlar. “That is exactly the kind of person I want to hire in my private practice, because I want to have those same traits once you come and join my group. You are demonstrating to me the fit that is about 50% of what I need in a new hire.”

Given the many stories circulating about early-career radiologists who joined a private practice only to discover later that the practice was sold to a corporate entity, all panelists weighed in on the subject of how a recruit can assess a private practice’s commitment to independence.

What are the group’s mission and core values? “If a group doesn’t have a mission statement and core values, that’s a red flag,” said Dr. Kasotakis. He also recommended paying attention to the age of the radiologists in the group, sharing a hunch that practices with a younger demographic are less likely to sell.

Do shareholder demographics skew younger or older? “I do agree with the sentiment that the groups that tend to sell out may be a little bit older [demographically] because of the financial model of corporate radiology,” noted Dr. Wottrich. “If you only have a few years left, you can come out ahead [financially]. If you have many years left, you won't come out ahead. I mean, otherwise private equity wouldn't do this. You can't beat the house in Vegas.”

How transparent is the group? Having moved to Texas for a part-time employed position that 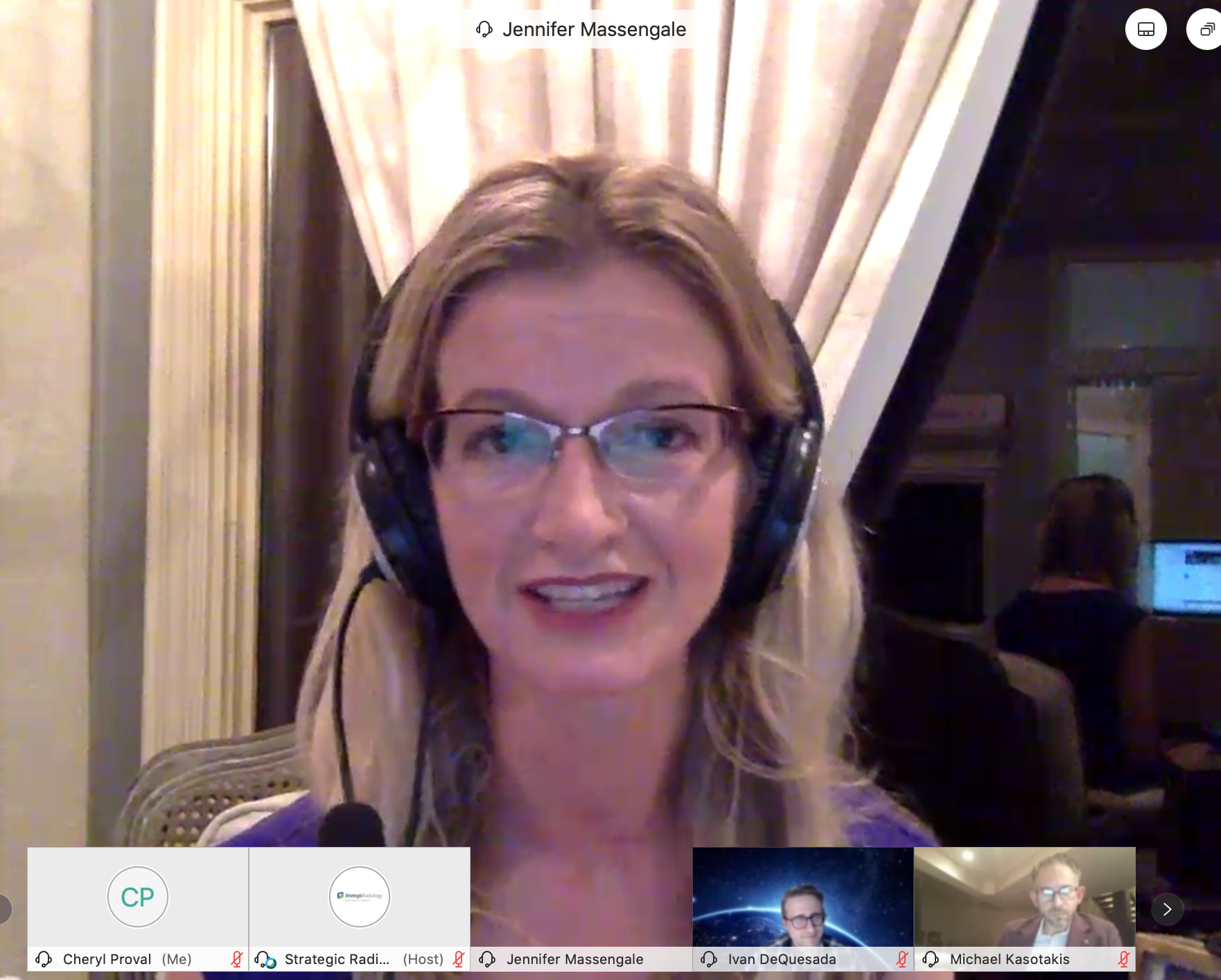 enabled her to read breast imaging studies exclusively and allow time for parenting young children, Dr. Massengale was unpleasantly surprised less than a year later when the practice leaders sent her a new, onerous 38-page contract and asked her to sign. They did not share that they had sold the practice, and the contract included a highly restrictive, complicated non-compete with some terms lasting from 10 years to a lifetime. She declined to sign and sought a new position.

“I went through interviewing about two years ago and that was definitely on my mind,” Dr. Massengale assured.  “Trying to get a good feel for a group’s transparency is very important—that answer will emerge as you learn how transparent the practice is. I recommend asking numerous people when you are in a one-on-one setting with people on your first interview day or in your follow-up interview. I would ask those still in their partnership work-up, and I would ask the older partners. One thing that drove me to choosing United Imaging Consultants was their transparency. They laid out their financials, and they were sharing that information with me even as an interviewee. That really was such a strong point for the group, to be so transparent.”

Ask point-blank—is the practice committed to independence? All panelists concurred that transparency is not only the key to getting a read on a practice’s commitment to independence, it is also a cultural hallmark of the best groups. “Just lob that question out there and see how it's handled,” advises Dr. Truhlar. “If everybody starts to get sort of shifty in their chair, and are loosening their ties, then you have your answer.”

No matter how committed a group is to independence, group contracts do not legally bind the group to 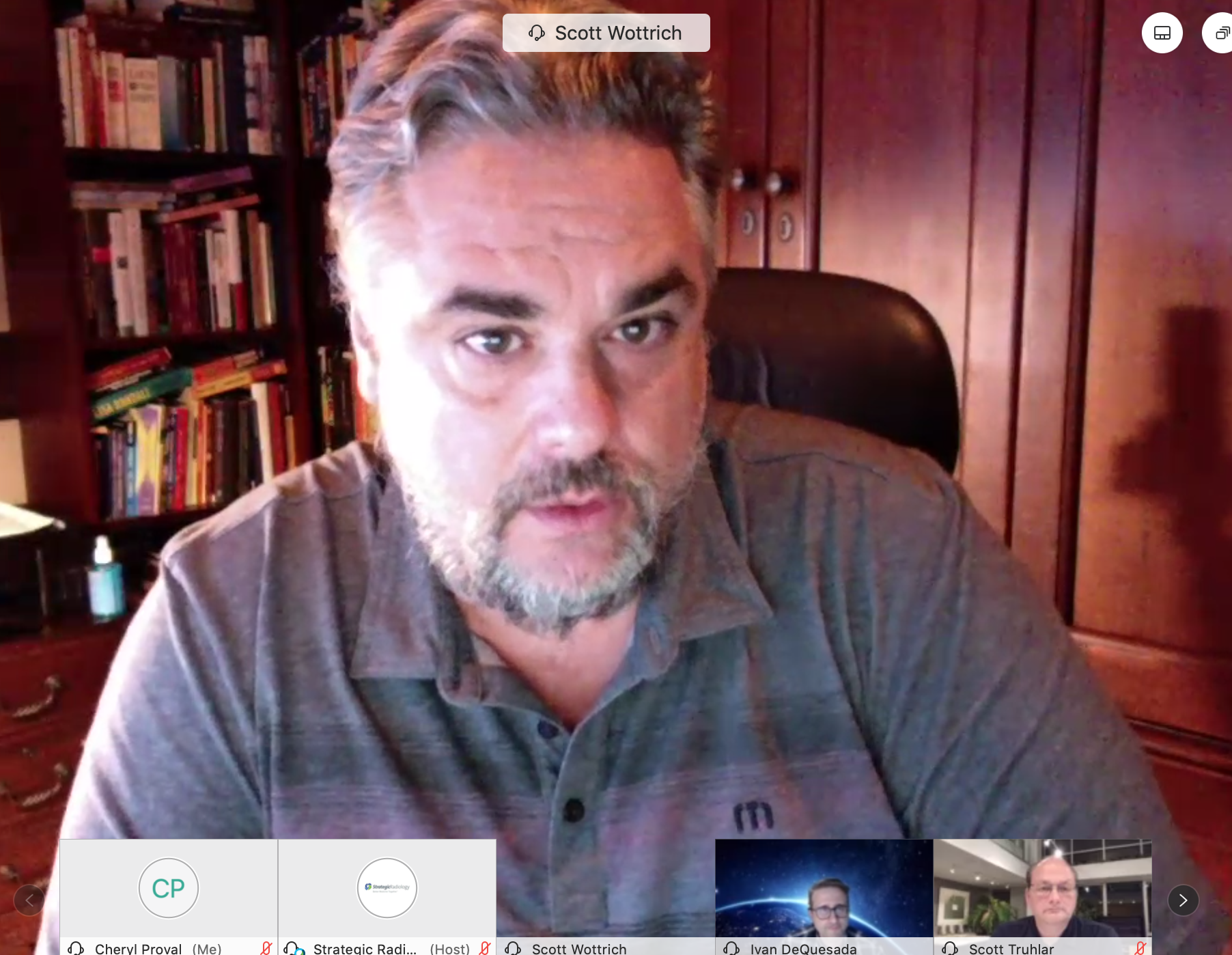 consult partner-track radiologists prior to a sale. “It's not illegal to do this, but I think in some ways it's pretty unethical and a big bait and switch,” Dr. Wottrich said. “They’re taking away your career and giving you a job, and there's a big difference there. In my opinion, if you run it yourself, if you control your own assets, you can be so nimble—as has been said, you don't have to go through endless meetings to get something done.”

Entrepreneurship and Free Will

The final question from Dr. DeQuesada probed how the different groups represented by the panelists express entrepreneurship and innovation, eliciting some interesting answers. “When you think about innovation, you might automatically assume that it means building something brick and mortar, more scanners, or imaging centers, but innovation can come from within, it can be organic and spontaneous,” Dr. Kasotakis said.  “It can come from the heart.

He shared an anecdote about how Huron Valley Radiology’s website, RadiologyExplained.com, got its start. Essentially, a friend’s father had been diagnosed with cancer and with access to a patient portal had “gone down the rabbit hole” of anxious Google searches as he tried to interpret the radiology reports to which he had access.

In response, Dr. Kasotakis and his colleagues created what he believes to be the first-ever website that translates radiology lexicon in terms the average person can understand. “We were super proud of that, and we published it and talked about it at meetings,” he shared

Dr. Truhlar cited the flexibility and freedom of motion inherent in private practice as a true innovation engine. “If there's something you want to improve in the practice, whether it's recruitment or the way the reports are structured or any of that, you just do it, there are no committee meetings."

When Covid-19 arrived in the U.S. last spring, Iowa was (and continues to be) a hotspot, introduced by a tour group that traveled abroad and fueled by the big meat-packing plants deemed an essential service. “We learned that there was going to be a problem on Thursday, and by Friday evening we had had an emergency meeting,” he reported. “We made all of the decisions about how we were going to handle the financials, the staffing, everything in one meeting that took about three hours of board time. And that's the game. We didn't fire anybody. We didn't have to put anyone on vacation. We figured it all out in two to three hours, and it worked. It’s just a wonderful way to practice.”

Dr. Massengale's experience of working for a practice that planned to sell to a corporate entity inspired her to pursue an MBA degree from George Washington University, where she completed her radiology residency. “This is what's happening out there, and especially for younger radiologists in the group,” she said. “This can happen to you. Seeing the business side of medicine, made me want to continue learning and to get my MBA. I personally feel that I can care for patients better in the private practice setting. It aligns more with my personal goals and with patient care as well.”

Entrepreneurship in private practice does not always result in immediate financial returns, Dr. Wottrich impressed.  Quantum Radiology was the first practice in Atlanta to initiate 100% real-time reads and it cost the practice upfront money.

“We had to staff more people, but in the long run, it did change the culture of the whole city,” he shared. “Now, everyone does it, it's a standard of care, which is better for everybody. “In the long run, you get a reputation after doing this for years that you’ll always do the right thing. What happens is that everyone wants you to do their work, so there are ROI benefits down the road of just staying the course and doing what you want for your Mom if she came into the ER.”

Practice ownership is central to doing “the right thing” in medicine, in Dr. Wottrich’s opinion. “At the core of the decision is whether or not you want to have control over your destiny,” he said. “The problem with the other models is you're beholden to a different master, and that master is all about investment return. When you do this, you're giving away between 25% and 40% of your assets in perpetuity forever, it's irreversible. That's why that contract is 38 pages long.”

“That is a huge, huge big deal,” he continued. “You're no longer controlling your assets. You're no longer controlling the basic tenets of your group no matter what any of them tell you about how, ‘You're a partner with us, we're going to let you run it yourself.’ The second you sign that contract you are a minority shareholder in a private equity company. That renders you almost no rights.”